You are using an outdated browser and will encounter some problems with our website. Please consider upgrading.
Upgrade Now
Help
All docsHelpGetting startedSatellite imagery

Mapbox Satellite is a global basemap of high resolution satellite imagery, and Mapbox Satellite Streets combines the Mapbox Satellite basemap with vector data from Mapbox Streets to bring contextual information to your map. The imagery data comes from a variety of commercial providers, as well as open data from NASA, USGS, and others. It is color-corrected (in other words, the raw imagery is adjusted so the final image looks realistic) and blended together into a single raster tileset. This guide provides an overview of how satellite imagery works and how to use it in your next Mapbox project.

Our satellite imagery comes from a variety of sources as raster data and is processed and composited together by Mapbox.

All satellite imagery is stored in raster format. Rasters are a pixel-based data format that efficiently represent continuous surfaces. Information in a raster is stored in a grid structure with each unit of information, or pixel, having the same size and shape but varying in value. Digital photographs, orthophotography, and satellite images are all stored in this format. 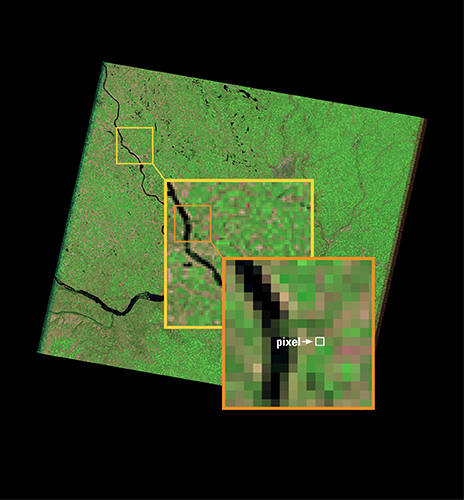 Raster formats are well-suited to analyses that look at change over space and time because each data value has an accessible location based on the grid. This allows us to access the same geographic location in two or more different rasters and compare their values.

When Earth-observing satellites take a picture, they read and record reflectance values collected from wavelengths along the electromagnetic spectrum.

The human eye can only see a small part of the light-energy that is the electromagnetic spectrum. This is called visible light, because our vision evolved to be most sensitive where the sun emits the most light, and is broadly restricted to wavelengths that make up what we call red, green, and blue. Satellite sensors perceive a far wider range of the electromagnetic spectrum. The ability of sensors to collect information outside of our normal range of vision allows us to make visible the previously invisible.

Bands of information vary in size and can be compiled into different types of composite images, each emphasizing a distinct physical property. Mapbox Satellite imagery primarily relies on bands 1, 2, and 3 which make up red, green, and blue visible light.

Mapbox Satellite imagery comes from a variety of sources depending on zoom level and geographic availability:

This layer is optimized for a balance between recency and aesthetic quality depending on data availability.

Before it's added to Mapbox Satellite, all our imagery is color-corrected, optimized, and composited together into a single raster tileset by our Satellite team. For a brief introduction to what this process involves, read our Processing satellite imagery tutorial.

Mapbox NAIP is an aerial imagery layer covering 48 states in the contiguous United States. The imagery is from the United States Department of Agriculture’s National Agriculture Imagery Program (NAIP). NAIP is open data collected at 60 cm every 2 to 3 years, and 2018–2019 data is available nearly everywhere, including the most remote areas for our outdoors, agriculture, and recreation users. You can view the dates of NAIP images in this NAIP Dates map. Read more about NAIP in our Updated aerial imagery in the U.S. blog post.

To start working with the mapbox.naip layer in Mapbox Studio, follow these steps:

You can also copy the NAIP (imagery alone) or NAIP Streets (with labels) styles to your Mapbox account by clicking the Copy button on the bottom right corner of each style's view page.

If you have access to imagery that better meets your needs than our Satellite layer, you can upload it using the Mapbox Uploads API or through your Mapbox Studio account. Make sure you convert your imagery into GeoTIFF format before you upload. Once you've uploaded your data, it will be automatically converted into a custom raster tileset which you can then add to your Mapbox project. For more information on uploading satellite imagery, see our Processing satellite imagery tutorial.

Mapbox grants users a license to trace imagery for OpenStreetMap. Producing derivative vector tilesets from imagery for commercial purposes is only permitted under a Mapbox Commercial Satellite license. Contact our sales team for more information.

If you notice an area where imagery needs improvement or updates for any reason, contact our team at imagery@mapbox.com. Imagery is not improved on a set schedule and is updated when and where it becomes available. To recommend an imagery source, mention it in your request.