You are using an outdated browser and will encounter some problems with our website. Please consider upgrading.
Upgrade Now
Help
All docsHelpTutorialsMake a heatmap with Mapbox GL JS

In this guide, you will learn how to make a heatmap using Mapbox GL JS. Heatmaps can be used to display large amounts of points in a way that is visually engaging and encourages your audience to explore your map.

What is the purpose of a heatmap?

The term "heatmap" can refer to a few different kinds of cartographic visualizations. You may see it applied to presidential election maps, population density maps, or even meteorological maps.

Among maps you'll find on the web, there are two common categories of heatmaps: those that encourage the user to explore dense point data, and those that interpolate discrete values over a continuous surface, creating a smooth gradient between those points. The latter is less common and most often used in scientific publications or when a phenomenon is distributed over an area in a predictable way. For example, your town may only have a few weather stations, but your favorite weather app displays a smooth gradient of temperatures across the entire area of your town. For your local weather service, it is reasonable to assume that, if two adjacent stations report different temperatures, the temperature between them will transition gradually from one to the next.

For the purposes of this tutorial, we are referring to a different kind of visualization that is more useful for showing the density of points over an area. This type of heatmap does not visualize density by aggregating features within a set of boundaries in the way a choropleth map does, but instead displays a continuous gradient between points.

Heatmaps aren't only useful for visualizing point density. They can also help visualize relative differences between those points. You can assign each point a higher or lower importance based on the value of a particular property within the dataset. In this tutorial, you will weight your map by the DBH property in your data. DBH stands for "diameter at breast height" and is a standard way of measuring a tree's diameter at 4.5 feet above the ground. In general, it is safe to assume that a tree with a higher DBH is older and larger. When you give these larger trees a higher weight compared to smaller saplings, your visualization can be an effective approximation of the area that is shaded by trees' leaves.

To add a heatmap layer to your map, you will need to configure a few properties. Understanding what these properties mean is key to creating a heatmap that accurately represents your data and strikes the right balance between too much detail and being a single, generalized blob.

Now that you understand the purpose of heatmaps and the paint properties you will be working with, it's time to set up your map. For this example, you will be using the Mapbox Dark template style. You can find the Style URLs for each of the template styles in our API documentation.

In your text editor, create a new index.html file, then copy and paste the below code into it. Make sure to replace YOUR_MAPBOX_ACCESS_TOKEN with an access token that is associated with your account. Once you add this code and save your index.html file, you can preview the file in your browser to make sure you see the map.

Be sure to save and store the GeoJSON file in the same directory as your project. You will also need to run this application from a local web server, otherwise you will receive a Cross-origin Resource Sharing (CORS) error. Python's SimpleHTTPServer is included on many computers and is a good choice if this is your first time running a local server.

You will first need to add the GeoJSON you downloaded at the beginning of this guide as the source for your heatmap. You can do this by using the addSource method. This source will be used to create not only a heatmap layer but also a circle layer. The heatmap layer will fade out while the circle layer fades in to show individual data points at higher zoom levels. Add the following code after the map you initialized in the previous step.

Next, use the addLayer method to create a new layer for your heatmap. Once you've created this layer, you will make use of the heatmap properties discussed earlier to fine-tune your heatmap's appearance.

For heatmap-weight, specify a range that reflects your data (the dbh property ranges from 1-62 in the GeoJSON source). Because larger trees have a high dbh, give them more weight in your heatmap by creating a stop function that increases heatmap-weight as dbh increases. 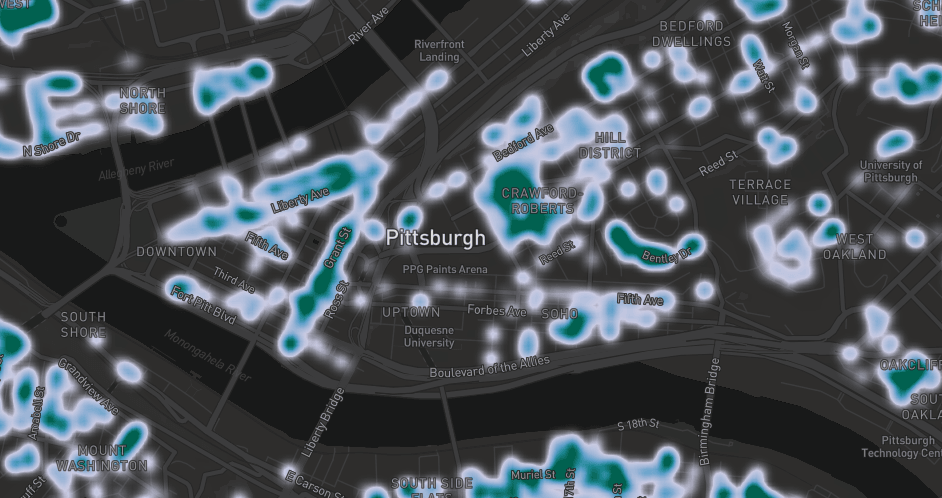 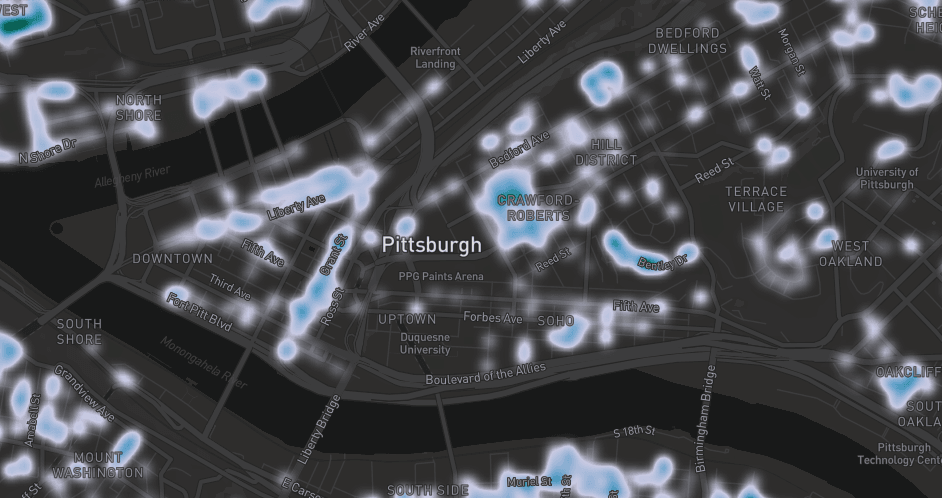 For heatmap-color, add an interpolate expression that defines a linear relationship between heatmap-density and heatmap-color using a set of input-output pairs. If you are interested in learning more about Mapbox GL JS Expressions, read the Get Started with Mapbox GL JS expressions guide and the Mapbox GL JS documentation.

Finish configuring your heatmap layer by setting values for heatmap-radius and heatmap-opacity. heatmap-radius should increase with zoom level to preserve the smoothness of the heatmap as the points become more dispersed. heatmap-opacity should be decreased from 1 to 0 between zoom levels 14 and 15 to provide a smooth transition as your circle layer fades in to replace the heatmap layer. Add the following code within the 'load' event handler after the addSource method.

Next, add a circle layer. As you zoom in to your heatmap, the points stop overlapping visually and it is no longer necessary to show their distribution and density. At this point, you can show the points themselves and allow viewers to explore the data interactively.

Remember how you used a stop function in the previous step to fade the heatmap layer out between zoom level 14 and 15? You'll need to replace that layer by fading your circle layer in, using a zoom function to increase its circle-opacity between zooms 14 and 15. For circle-radius, use a zoom-and-property function to increase the radius by zoom level and property (as demonstrated below). Add the following code after the heatmap layer you added in the last step.

The following code adds interactivity to your map by allowing your viewers to click on your circle layer to view a popup containing the tree's DBH value. Include the code below after your circle layer.

Congrats! You made your first heatmap with Mapbox GL JS!